Dr. Robert Jeffress is a Southern Baptist pastor, author, and radio and television host. He is the Senior Minister of the 14,000-member, First Baptist Church in Dallas, TX and is a Fox News Contributor. His sermons are broadcast on the television and radio program Pathway to Victory, which is broadcast on more than 1,200 television stations in the United States and 28 other countries, and is heard on 900 stations and broadcast live in 195 countries

First Dallas contracted Paragon for the design, construction, and installation of the new, permanent broadcast studio set for the Pathway to Victory production, hosted by Dr. Jeffress. The new set allows the First Dallas media ministry to consistently shoot Pastors’ in’s and out’s on a regular basis without having to rent equipment. The set was also designed in a way that allowed it to be used on a weekly basis for many other production needs outside of those pertaining to Pathway to Victory.

"Paragon was a great fit for this project because of their flexibility and versatility."

Initial conversations and meetings with First Baptist Dallas suggested that they were looking for a set that was very versatile and would feel like something between a study and a FOX News set. The modular, aluminum framed, curved set with interior illumination and accent LED lighting is approximately 10’ tall x 36’ wide. The LED lighting allows for limitless flexibility and versatility. The set features a fully framed rotating 80” box in the center with a Pathway to Victory logo on one side and an 80” 4K high definition display on the other side. The display aides greatly in the church’s ability to do branding for the church, their productions, and products.

The end columns also feature the compass pointer from the church’s logo in an architectural treatment that is front lit top and bottom to reveal its texture. The curved set and it’s various textures and finishes allow it to be used in multiple shots with different angles so that various shows can have different looks all on the same set. A custom made product table included an embossment of their logo on the top and the legs of the table were made to look like the same north/south pointer. Frosted, acrylic shelves were created to feature product. Also included was a custom made floor mat to be seen by jib cameras that again features their logo.

All of the custom scenic and architectural elements were prefabricated by Paragon in Springfield MO. Paragon's model of building elements in a scenic/modular fashion versus traditional construction methods reduces cost significantly. Its ability to prefabricate pieces and transport them to the job site for quick installation minimizes down time saving additional dollars. This brings real tangible VALUE to any project. At First Dallas, the new set was installed in two days with the first shoot only two days after installation was complete. 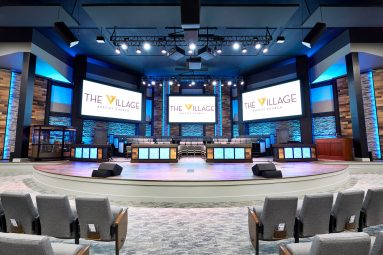 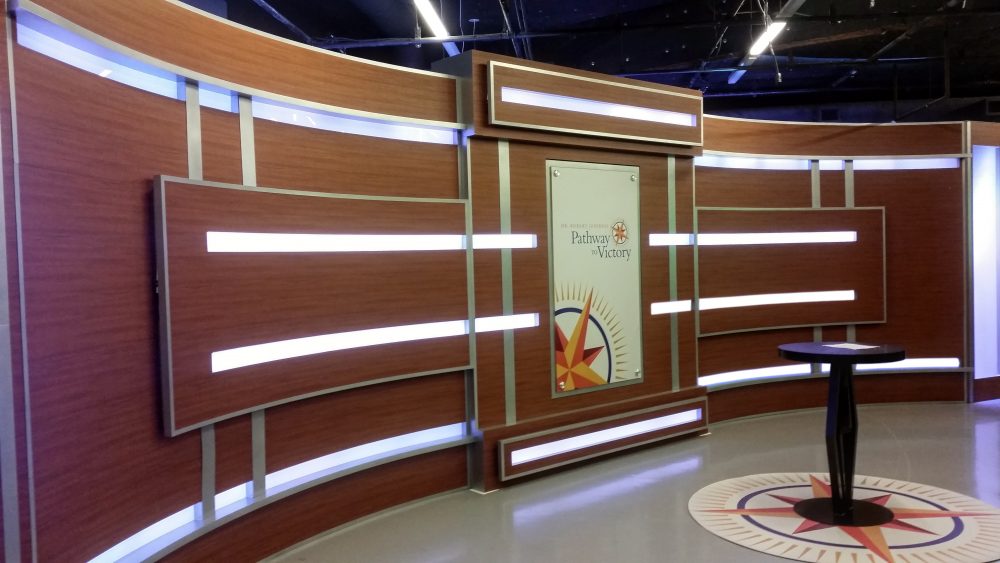 Let's talk about your next project.